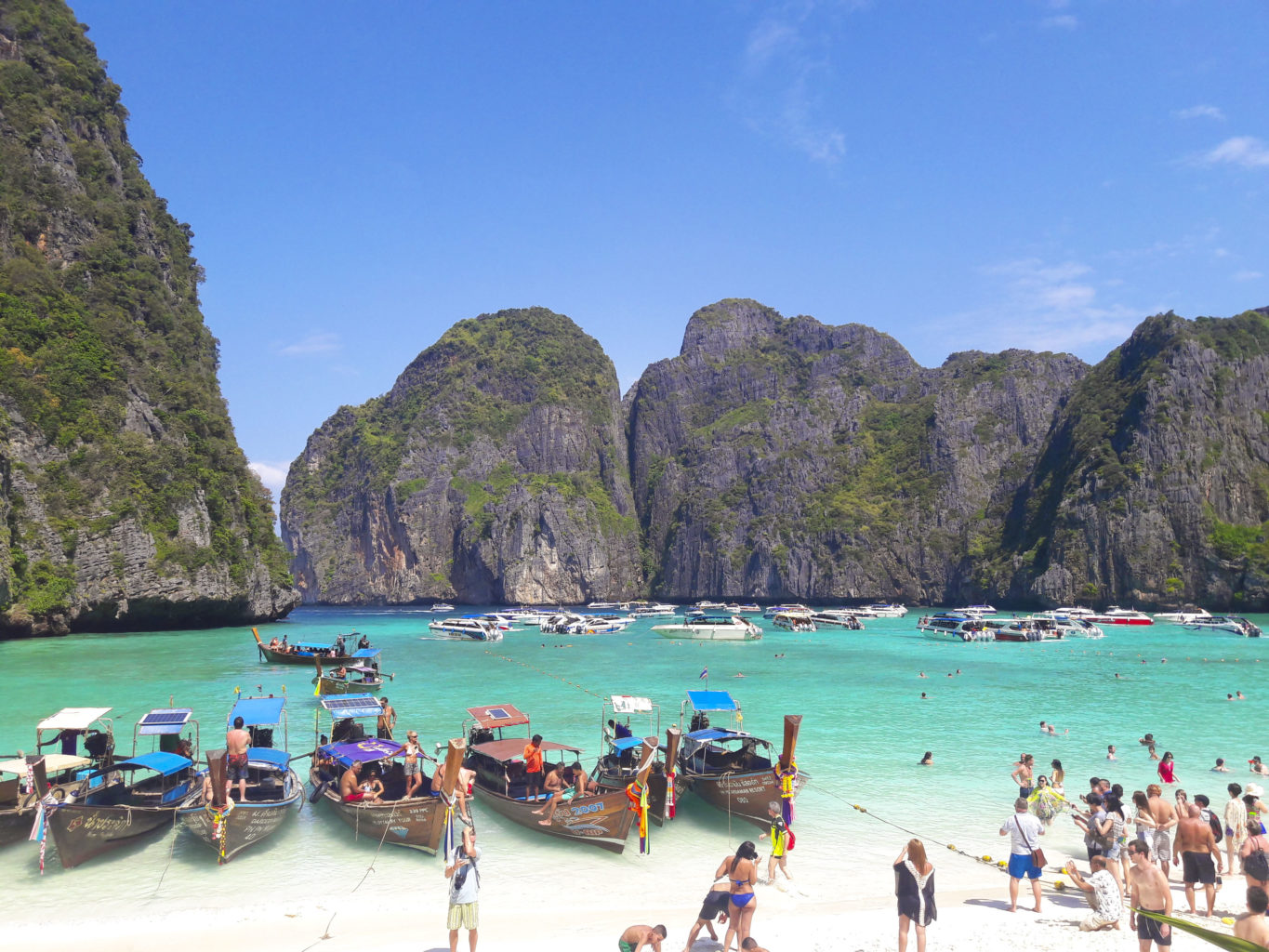 In 1996, Alex Garland, wrote a novel about a young English backpacker named Richard, who ditches his familiar life to travel in search of something new. He lands in Thailand, where he meets a mentally disturbed guy who gives him a hand-drawn map. It contains directions to a mysterious island with a paradise-like beach, untouched by tourists. Lured by the idea to find Eden on Earth, together with a couple of travelers, he sets off on a journey only to witness the collapse of a utopian life. A collapse that comes after colonizing a paradise. The novel is The Beach, later adapted into a movie, staring Leonardo DiCaprio. And the mystical island? No other but Ko Phi Phi Leh, the smaller of the two Phi Phi islands.

Fast forward 21 years later, I met Terry and Jamie on my very first night on Koh Lanta. Both traveling alone, they had met in Bangkok and decided to continue together. They were coming to Ko Lanta from the Ko Phi Phi islands for “a body detox”. No sleep, non-stop party, cocktails in buckets, bars with all-you-can-drink offers, packed out beaches, easy hook-ups, drugs. That was the island experience. On top of that, Jamie had gotten a nice souvenir in a bar too – a cutout of a penis on his chest hair. Even for party veterans like them, Ko Phi Phi islands offered too much.

The next day I had a dinner with another group of travelers I met in the hostel. “Ko Phi Phi? It is crazy, man. Girls get a bucket if they show their boobs. At night you can see guys running around naked. People sleeping on the beach in their own vomit.” The stories were recurring but all ended with the same advice: “You have to go see it for yourself. You just cannot miss Leonardo’s beach. It’s beautiful.”

I couldn’t fall asleep. I was tossing and turning and turning and tossing. The next day I was supposed to go to Ko Phi Phi islands and spend the night there … or maybe not. I ran swiftly down the stairs. “I want to cancel my trip tomorrow. Can I go for a day trip instead and come back to spend the night in Lanta?”, I desperately asked the hostel owner, who was about to call it a night. “Oh, it is too late now. But let me see what I can do.” I sat across from him waiting for the verdict. After 3 phone calls and 15 minutes of fidgeting, he looked at me with a smile. “OK. You – lucky. You leave at 8:30 tomorrow and come back at 7:00 in the evening.”  “Yes”, I jumped off the couch in triumph.

The next day I reached the port of Ko Phi Phi Don, the larger of the two islands, and the notorious party place. From there together with another seven travelers, I got into a colorful long tail boat that was going to take us to Leonardo’s island. 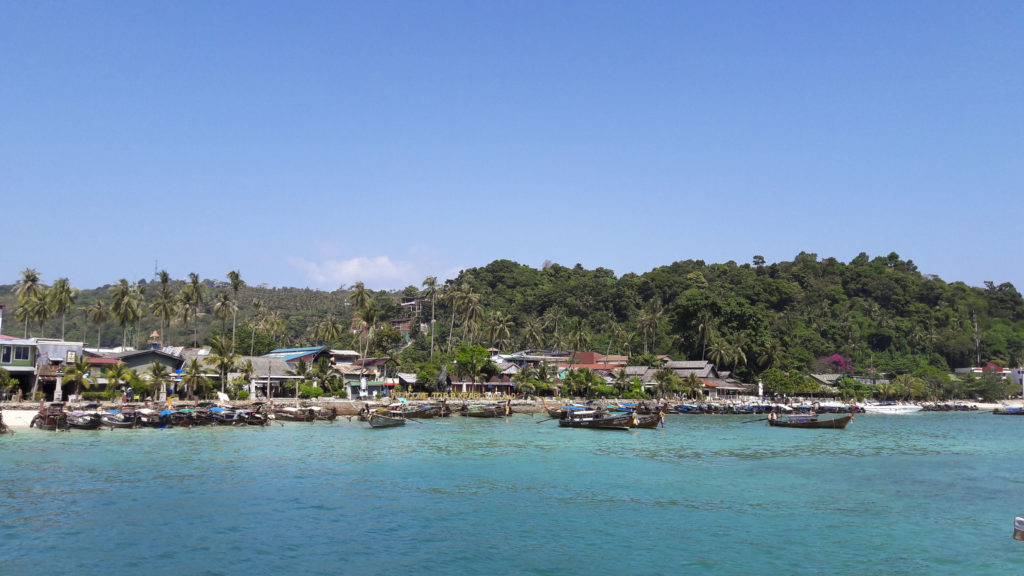 In around thirty minutes, we entered into a lagoon with turquoise water, a white sand beach and jungle vegetation, sheltered by 100-meter high craggy cliffs. Maya Bay, the beach from The Beach. It was beautiful. Although the island was uninhabited, a swarm of people was frantically marching up and down the beach. I payed the 400 baht (10 euro) national park fee and got off the boat to join them. 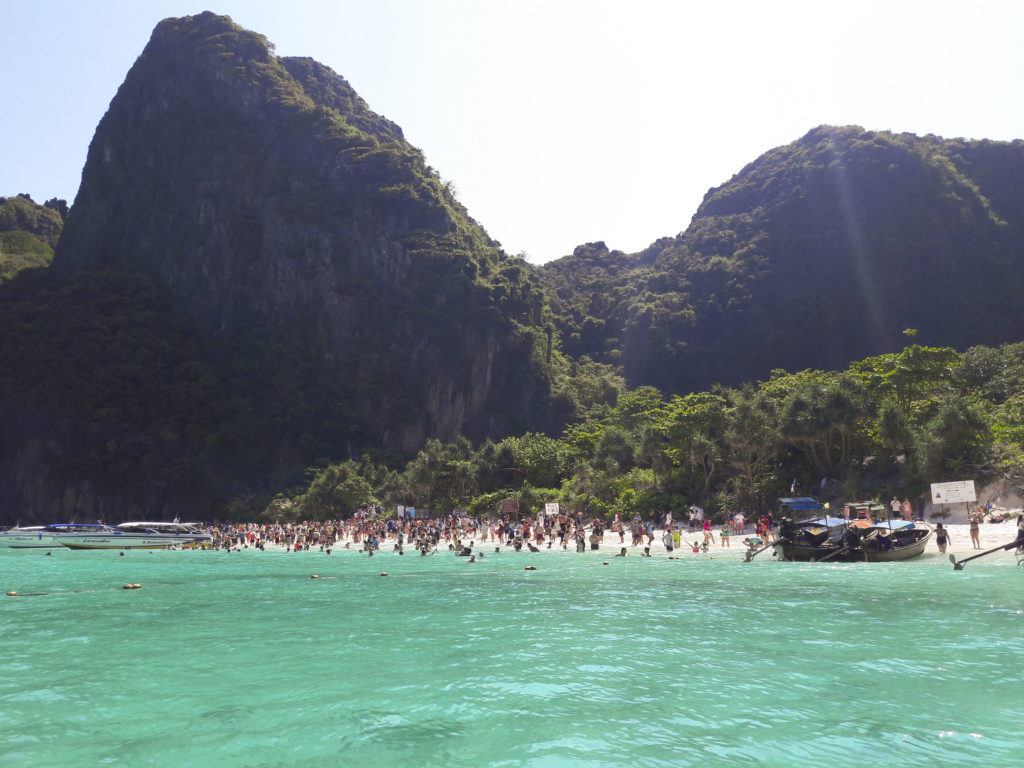 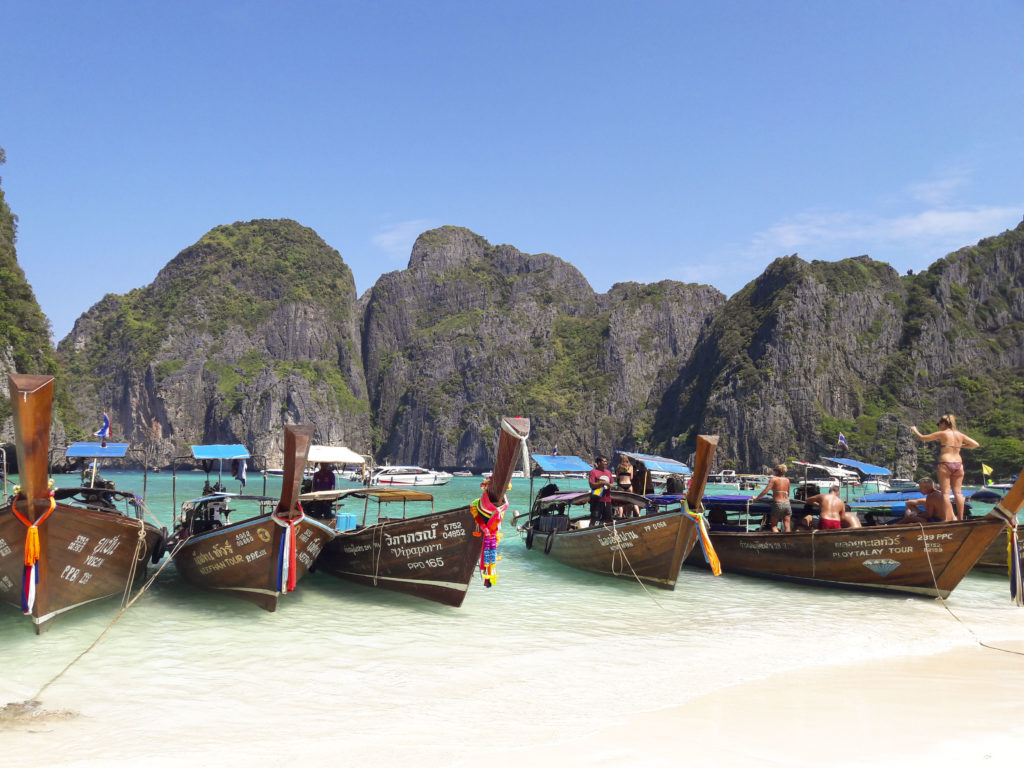 We had one hour to explore. I followed the many through a sandy path between the high jungle trees. Five minutes later I was already on the other side of Maya Bay to Loh Samah Bay – a viewpoint in a wide crevice between two high cliffs jutting out into the crystal clear water, a perfect spot for snorkeling. As the island was an archipelago of ridges, that was the end of the walkable area. 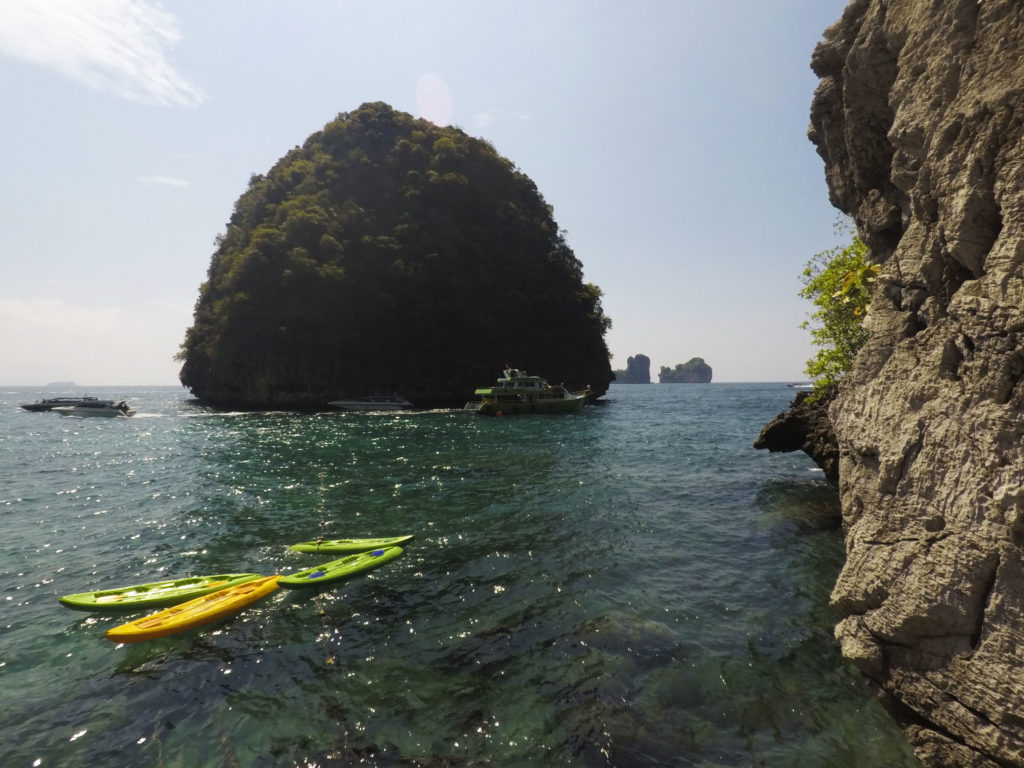 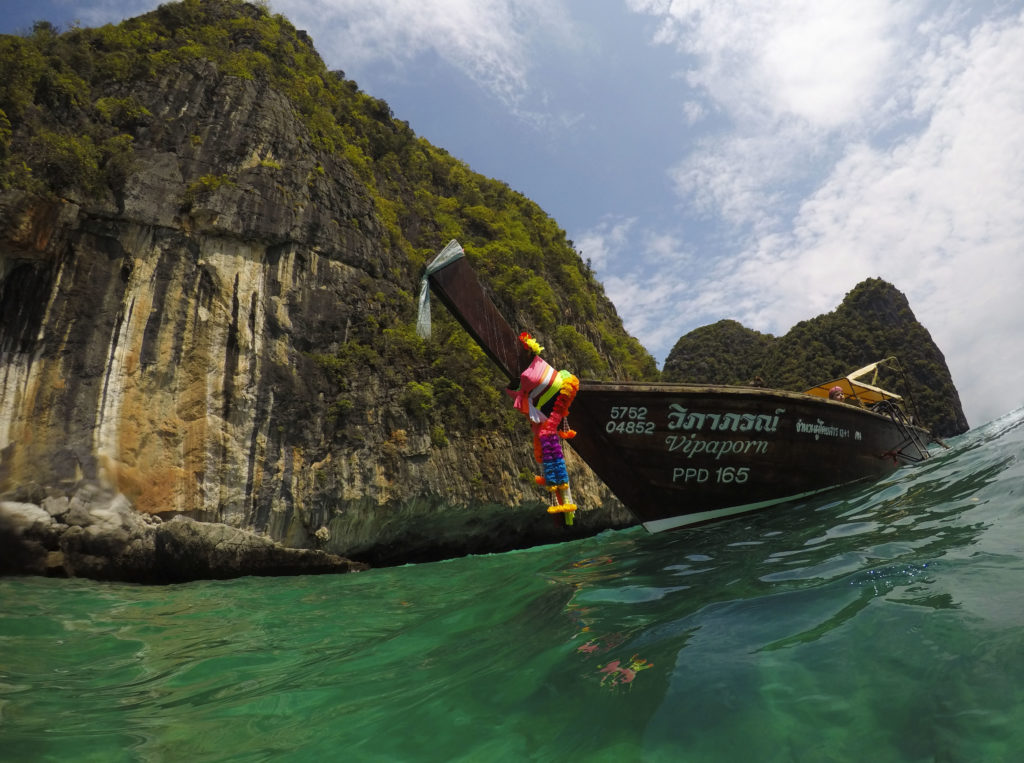 I returned to Maya Bay. I found a patch of shade to hide from the scorching sun. In the remaining minutes I tried to picture the island without the puttering of the dozens of long tail boats, without the crowds roaming the beach in desperate need to find the perfect spot for the perfect selfie, without the many Chinese tourists in t-shirts floating in a small designated swimming area. In deed, it was a paradise-like island. 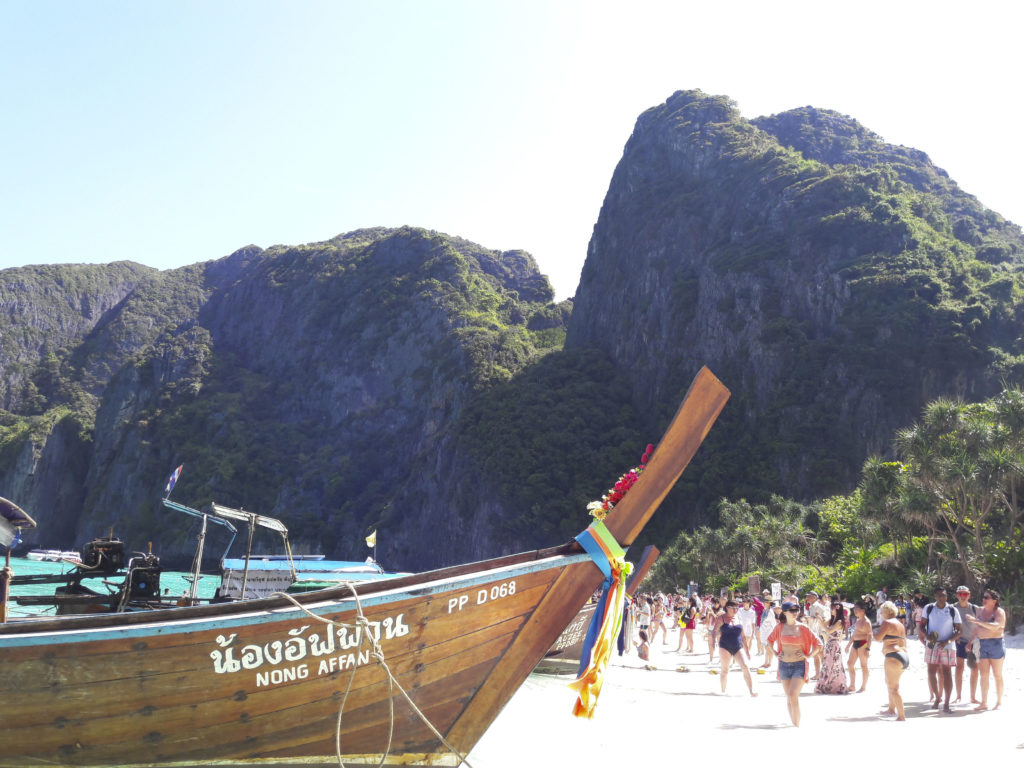 All aboard. The hour in paradise was over. On the way back we passed by Viking Cave, located at the bottom of a high limestone cliff on the other side of the island. Tae, our local long-tail boat captain, told us that the cave was a home of a colony of swiflets. Their edible nests, composed of nothing but solidified saliva, were harvested and sold to make a bird’s nest soup – an expensive aphrodisiac meal that also promoted good health and young skin. Yuck!

It started to rain. Just one last stop. On a small strip of sand nested in a cove, a patrol of monkeys was waiting for the next round of curious tourists to come. They had learnt that while cameras are being shoved down their faces, they might snatch a souvenir – sunglasses, hat and even a camera. On Monkey beach the monkeys outsmarted the people. 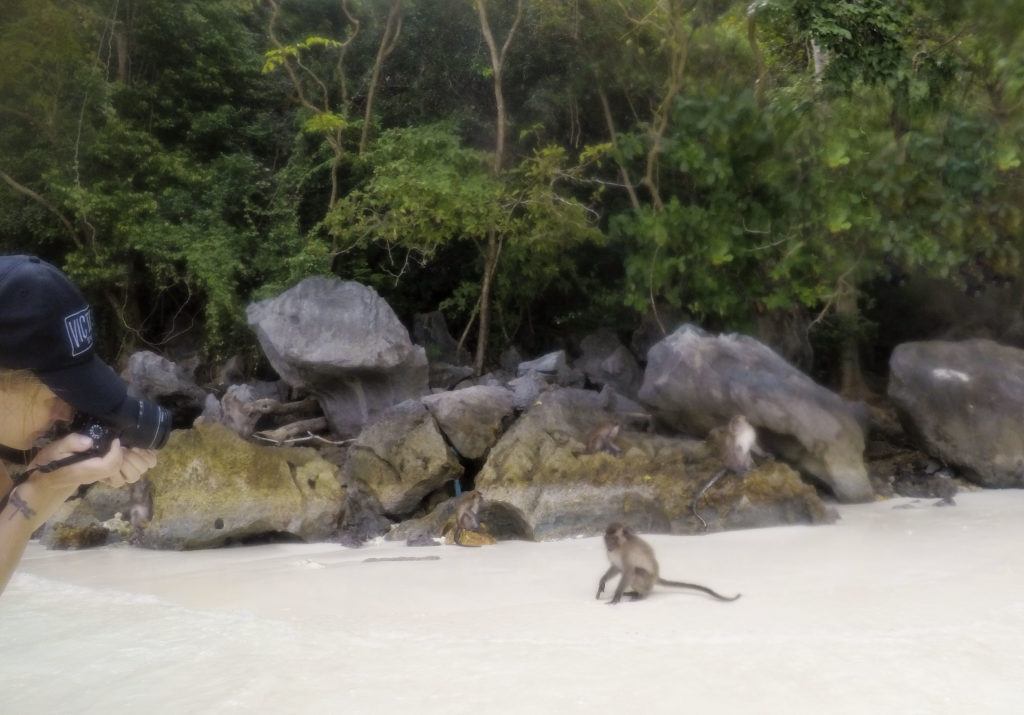 We were back at Ko Phi Phi Don’s port at the late afternoon. I decided to use the remaining few hours of my day trip to reach the top of the island and its iconic viewpoint. Actually, they were three of them. I walked into the narrow streets of Ton Sai, the island’s main village, built on a sandy isthmus between the island’s two tall limestone ridges. They were crammed full of restaurants, souvenir shops, tour operators, tattoo and massage studios. Tourists everywhere. I followed the signs to a path of cement steps leading to the viewpoints. In about 15 minutes of sweating I reached Viewpoint #1. The Phi Phi skyline. This is a great spot to see how developed the island actually is. 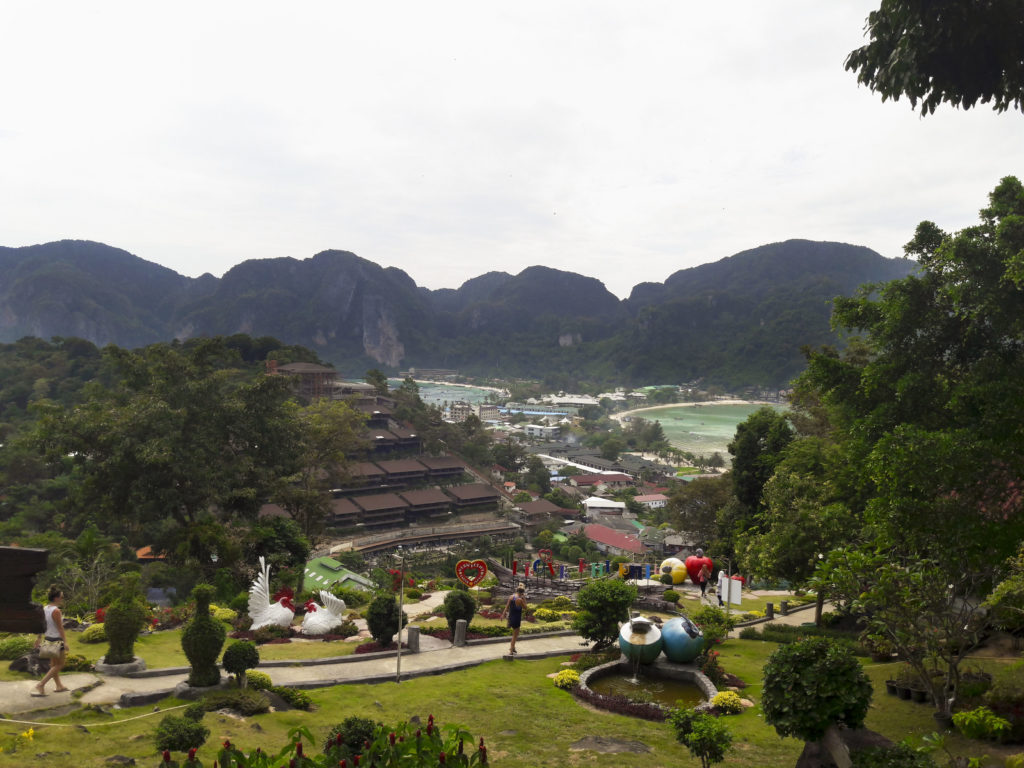 I followed the path to Viewpoint #2. A popular sunset spot and a last stop of many afternoon tours, Viewpoint #2 was the most popular of them three. Many stop here but I followed a dirt path uphill through the trees. 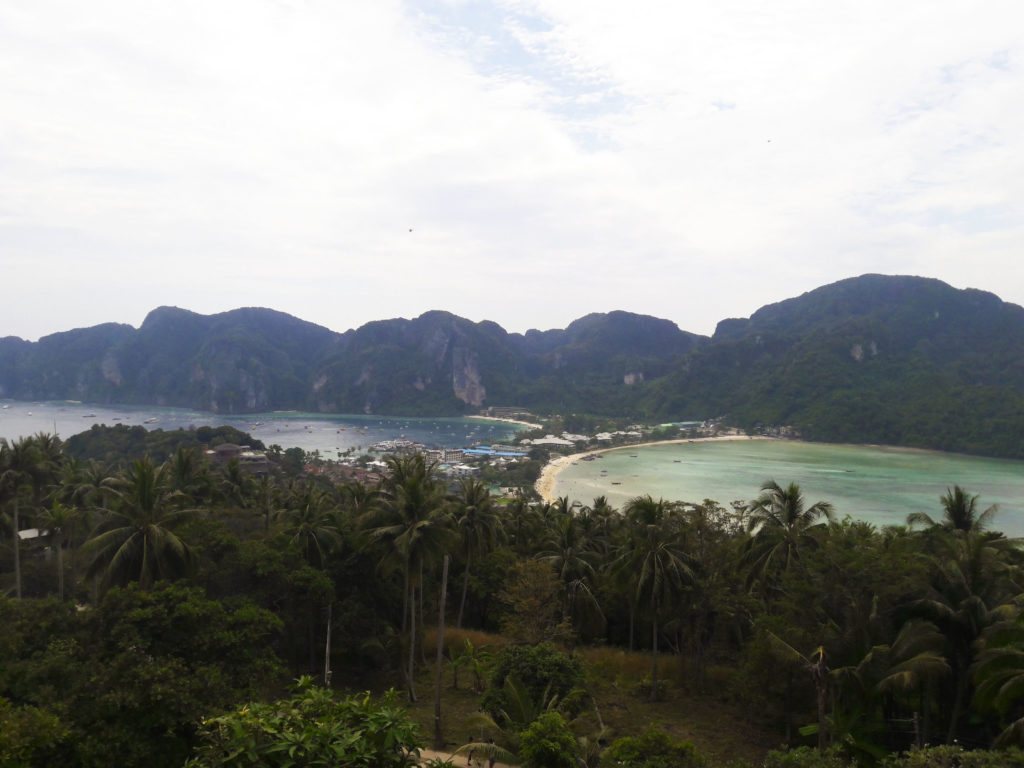 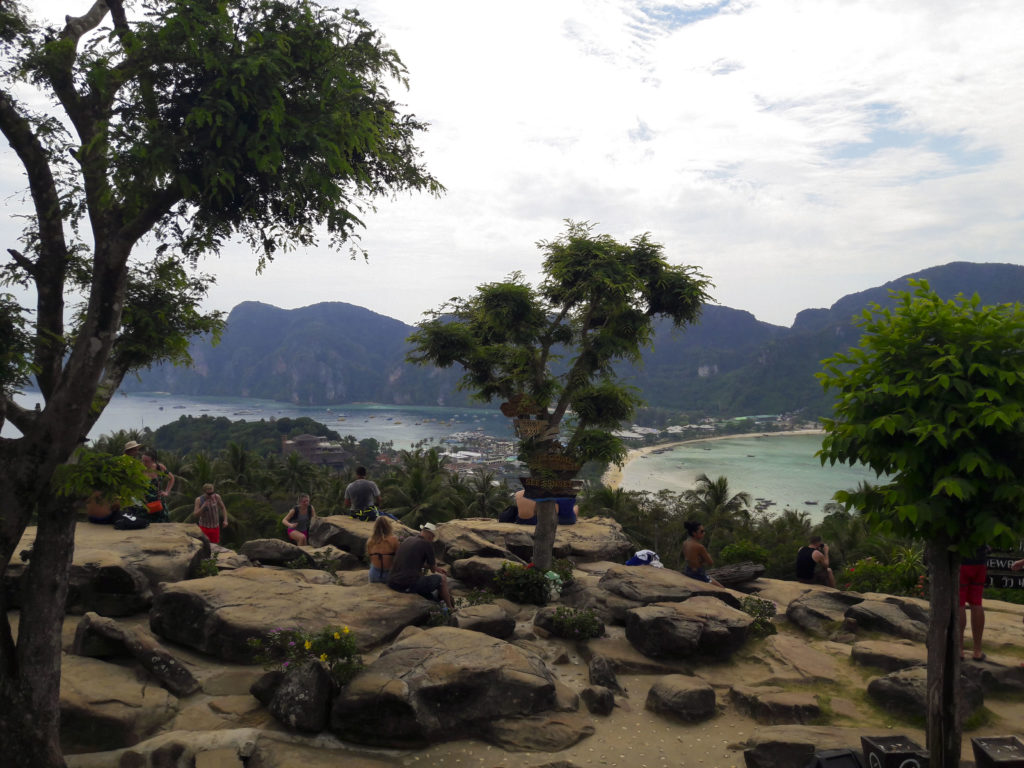 I was at the highest point of the island. Viewpoint #3. I had it all for myself. 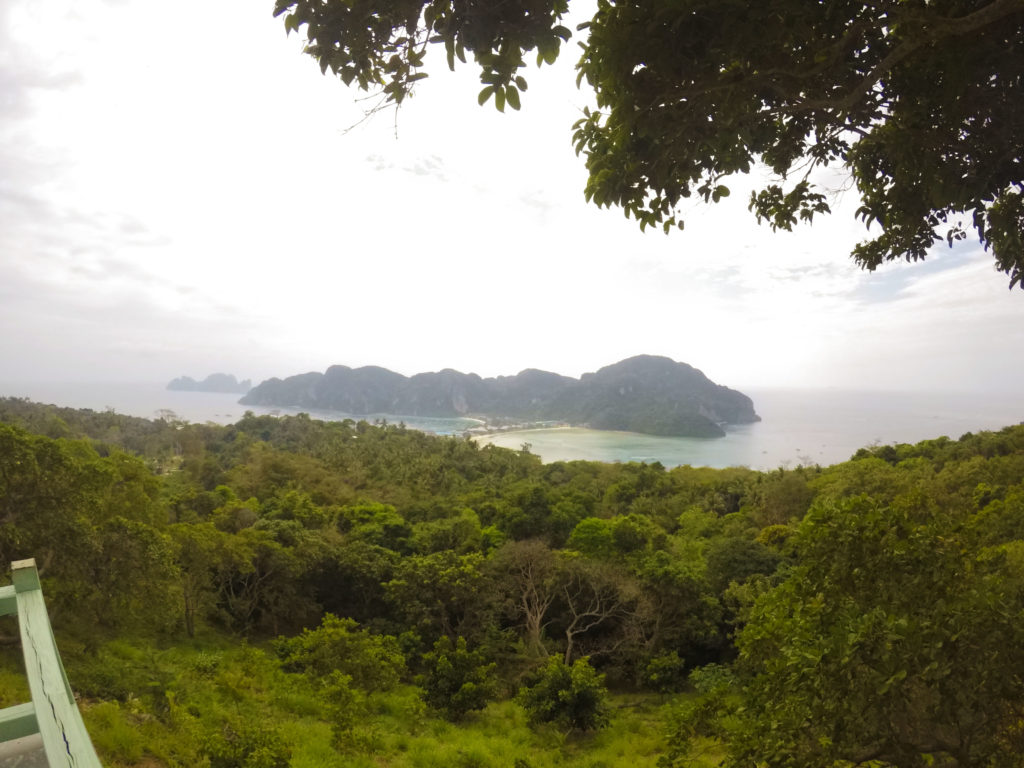 There was only a wooden terrace with a tiny shop selling refreshments and a Thai woman. “In 2004, all was gone”, she pointed at Ton Sai. “Everything – gone”. She referred to the 2004 tsunami that had completely devastated the island. “And now? How is it now?”, I asked, looking at the village. “Now – many people. Before tsunami – not so much. “, she said and I felt a sense of longing for the past and a dread of the future for it was the tsunami of tourists today that was slowly but surely devastating the island. She advised me to stay on the East side of the island, where it was less crowded and a lot quieter. When I told her I am staying in Ko Lanta, she told me I was smart.

I left the paradise island before the arrival of the sinister night. On the ferry, for the lack of better amusement, one was forced to either read, think, or sleep. I reflected on the island experience. It was obvious that Ko Phi Phi had fallen victim to its beauty, Leonardo DiCaprio, and Hollywood. Ironically, the backpacker-odyssey novel, that is not a manifesto but rather a criticism of that particular backpackers’ culture, opened up the gates to millions of other tourists. Richard’s secret paradise-island was not only completely colonized, but had became a trademark of Thailand’s tourism and a travelers’ must-do Facebook check-in point. Just like in the novel, the backpackers today couldn’t care less about the Thais and their culture. For them Ko Phi Phi is nothing but a huge themed amusement park where the Thais are just part of the scenery. But it is not just them. Unfortunately, Thailand got out of the way to encourage any sorts of tourism by offering all-you-can-do tourist packages. The opportunity cost? Environmental issues – destruction of the reefs, tearing down of jungle vegetation, litter.

I saw paradise lost. Or what was left of it anyway before it is completely engulfed by vanity and greed.

Update August 2019:  Maya Bay was closed in 2018 and will remain closed until mid-2021. Before that, up to 5,000 people were visiting the bay every day and most of its coral died as a result. Tourists and local tour operators are not very happy as the former want to take a picture of that Instagramable place and the latter want to earn a living. I don’t blame them. But since the bay closed last year, blacktip reef sharks have been sighted swimming in the waters of the bay.🤗

I’m glad that the Thai government took things into their hands to restrict over-tourism and protect the environment. Sometimes our freedom needs to be restricted for the greater good!

You can still visit Ko Phi Phi Don though, the bigger of the two Phi Phi islands.