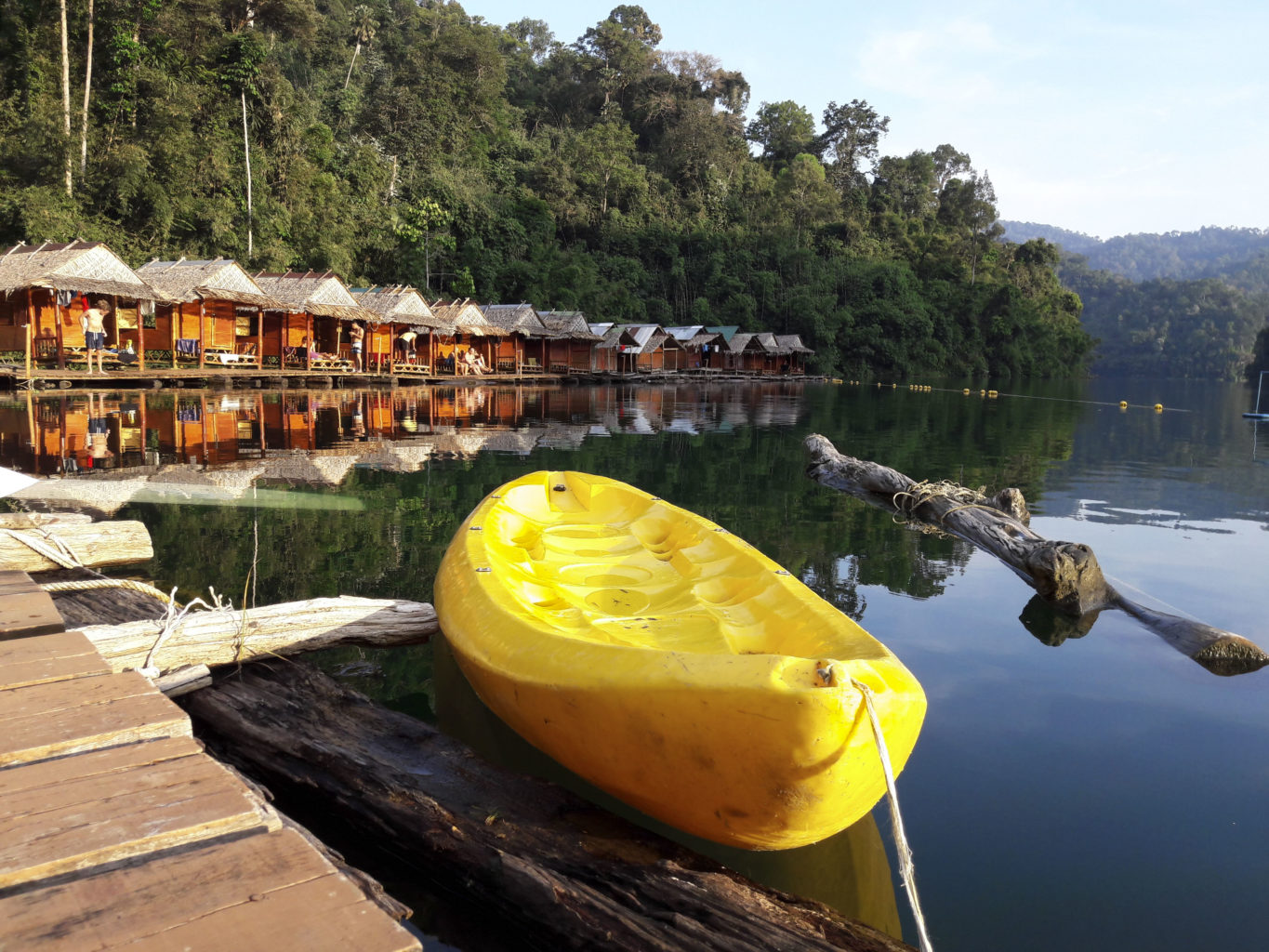 Terry, Patrick, Kat and I got off from the back of the pickup. We had to buy rubber shoes from the street market for our jungle trek tomorrow. All of my companions got rubber shoes with spikes on them, very much resembling the soccer shoes. But not me. I got black ballerina-like rubber ones. Even though I was going to the jungle, I couldn’t bare the thought of wearing hideous shoes. When our Thai driver saw me coming out of the market holding them, he said he wished to see me walking with those in the jungle. “I will be walking in style, my friend”, I replied. He made a grimace and laughed.

At Cheow Larn Lake Pier long tail boats were waiting. We met Cho, our local Thai guide for the next two days. He quickly distributed life jackets and put us on one of the boats. “One-hour ride through the lake to reach the houses”, Cho shouted as the boat was leaving. 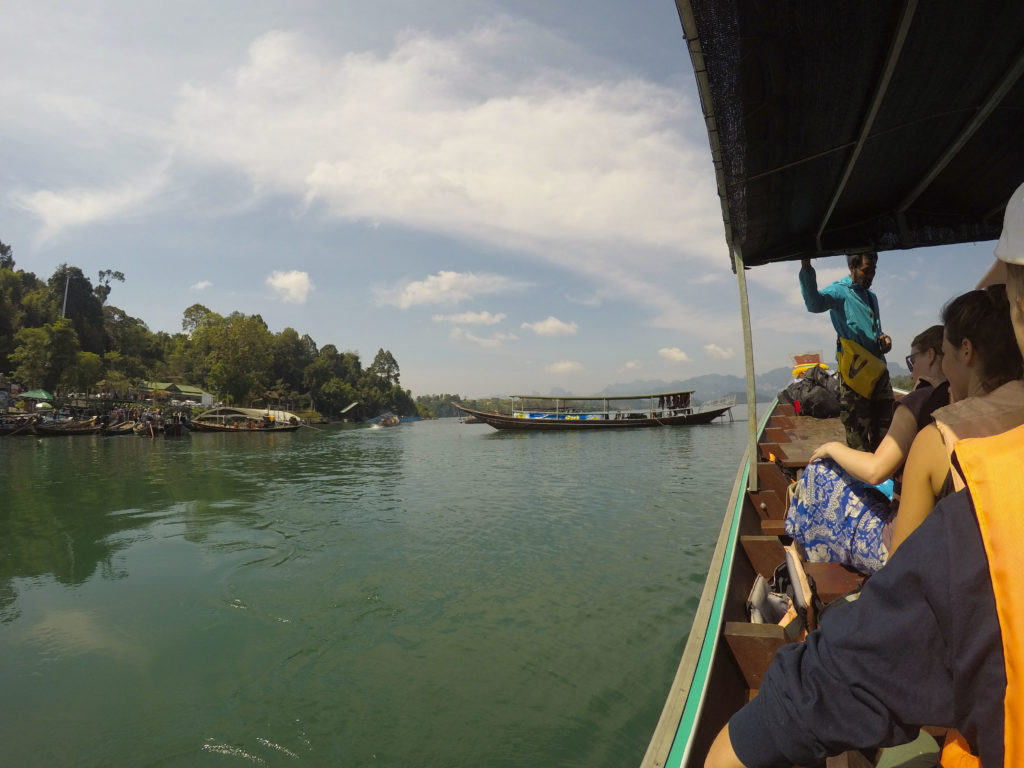 Off we go, Khao Sok

Cheow Larn Lake is a spectacular 165-square-kilometer man-made lake, formed by the damming and flooding of a valley of dense rainforest in 1982. Mesmerized by the view – dramatic limestone cliffs coming out of crystal clear water from all sides, we were like a flamboyance of flamingos moving our heads back and forth from side to side. 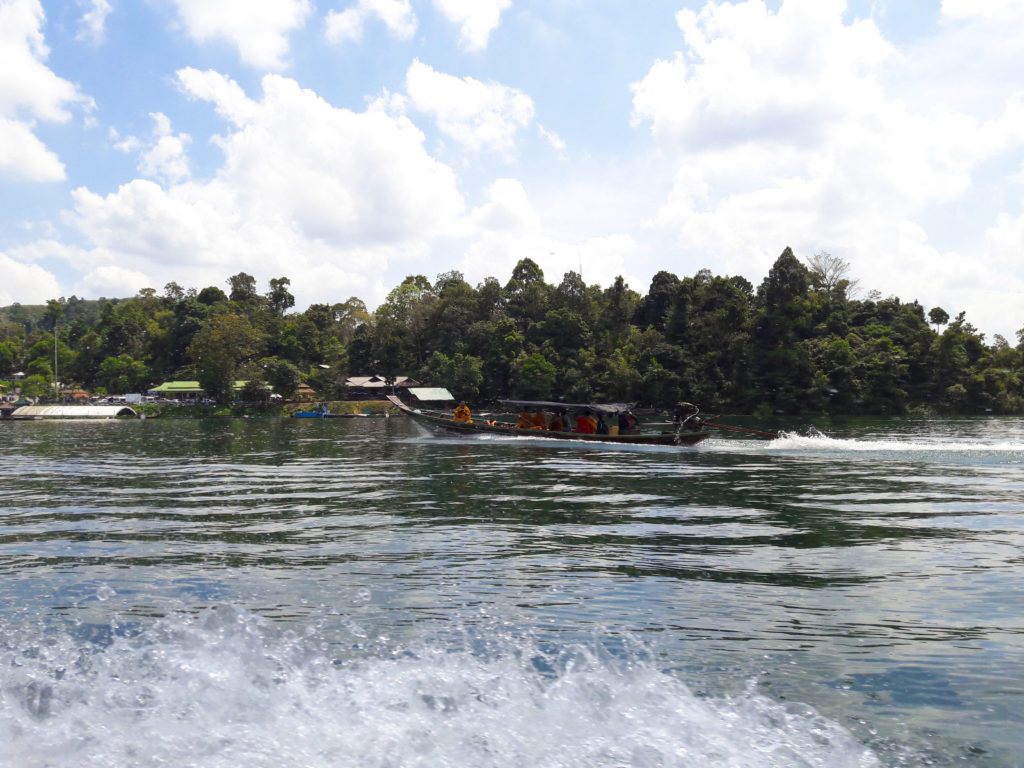 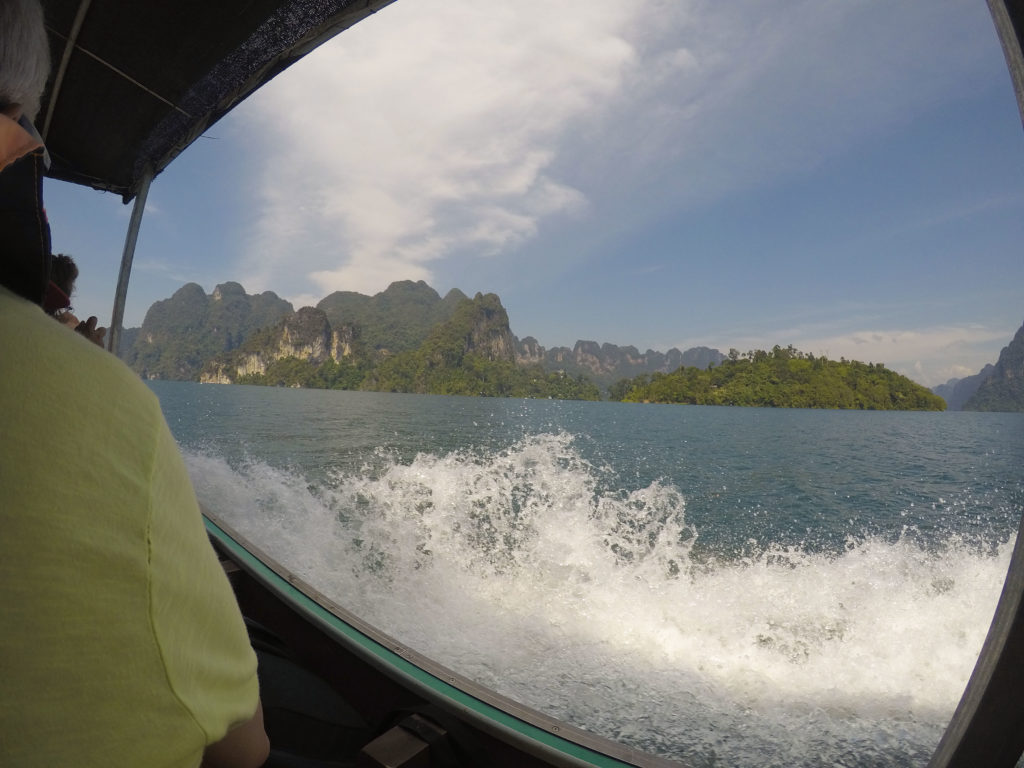 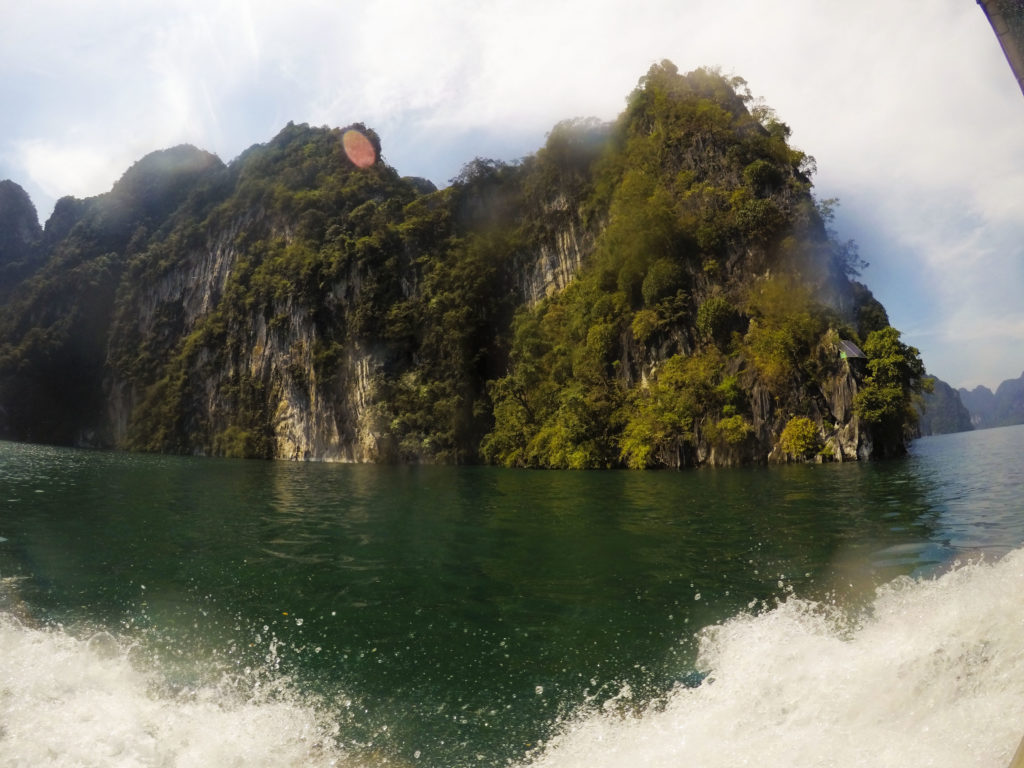 The hour felt like ten minutes. The boat slowed down and we saw our accommodation in the distance. Little by little we were entering into a fairytale-like setting. Tiny wooden houses floating on top of the lake gently nested in lowland rainforest.

We got off the boat. Cho quickly checked us in. Friends and some of the solo travelers were paired together. The few remaining got a whole bungalow for themselves. I was among the lucky ones. My bungalow was the next-to-last. With only a thin, old, hard as a rock mattress on the floor, a pillow, a blanket and a mosquito net on top, that two-by-two-meter bungalow was a five star accommodation in the wild. No internet. No mobile connection. Electricity power till 10 pm. Serenity. 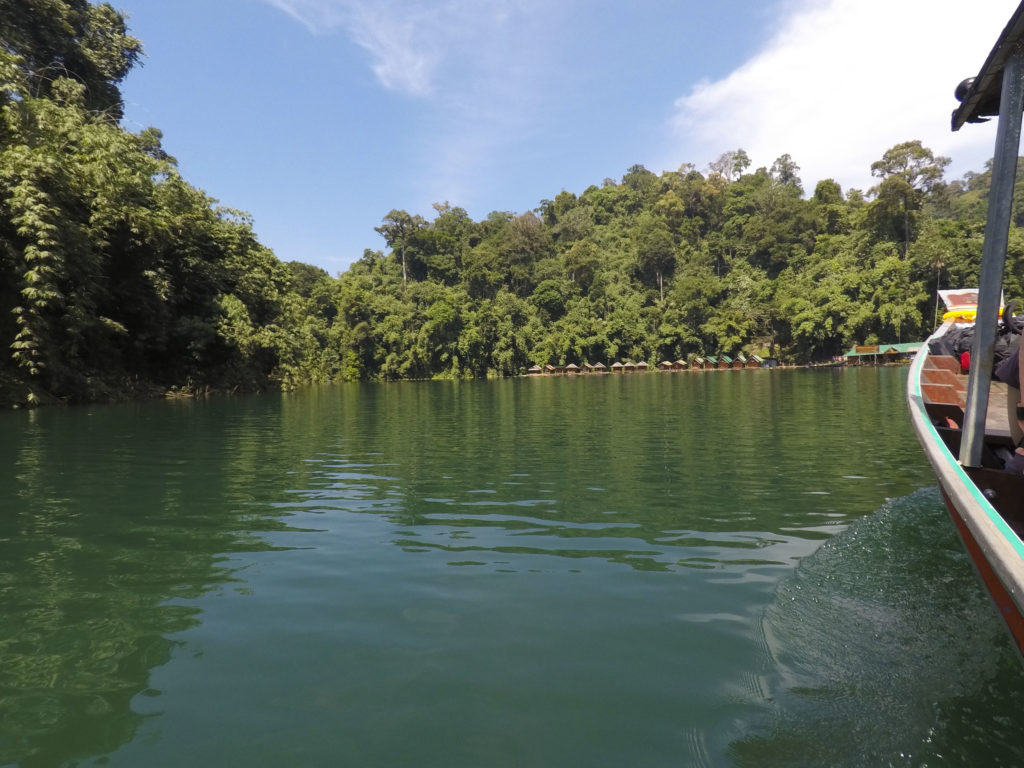 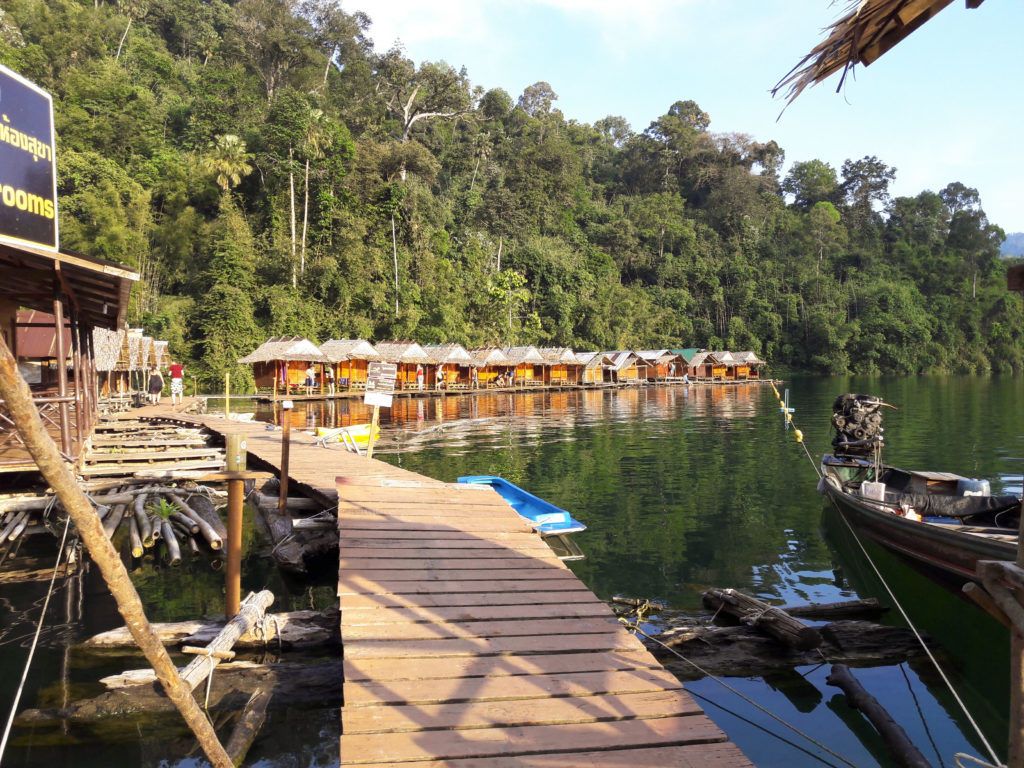 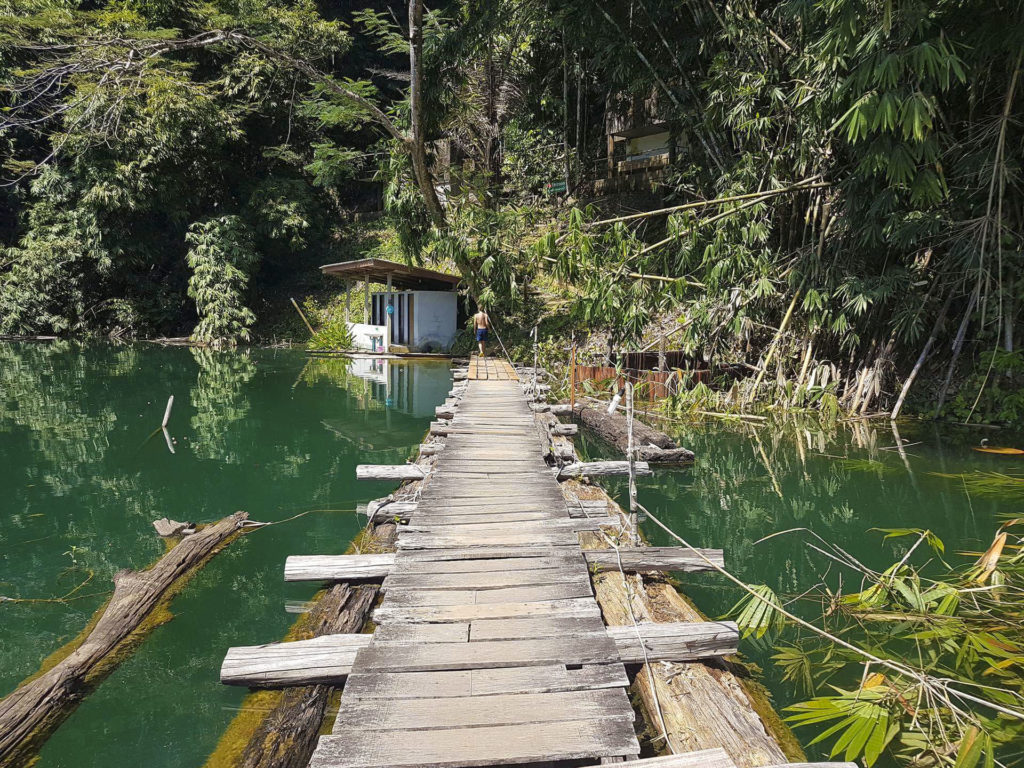 One wrong step and you are into the water, Lake houses, Khao Sok 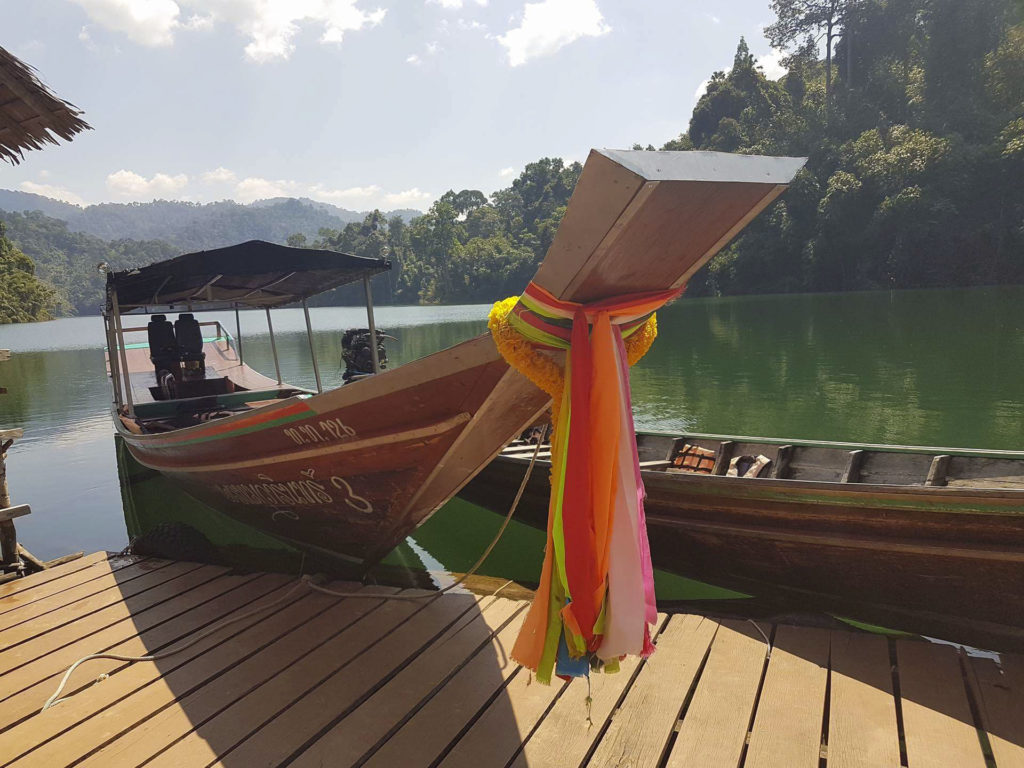 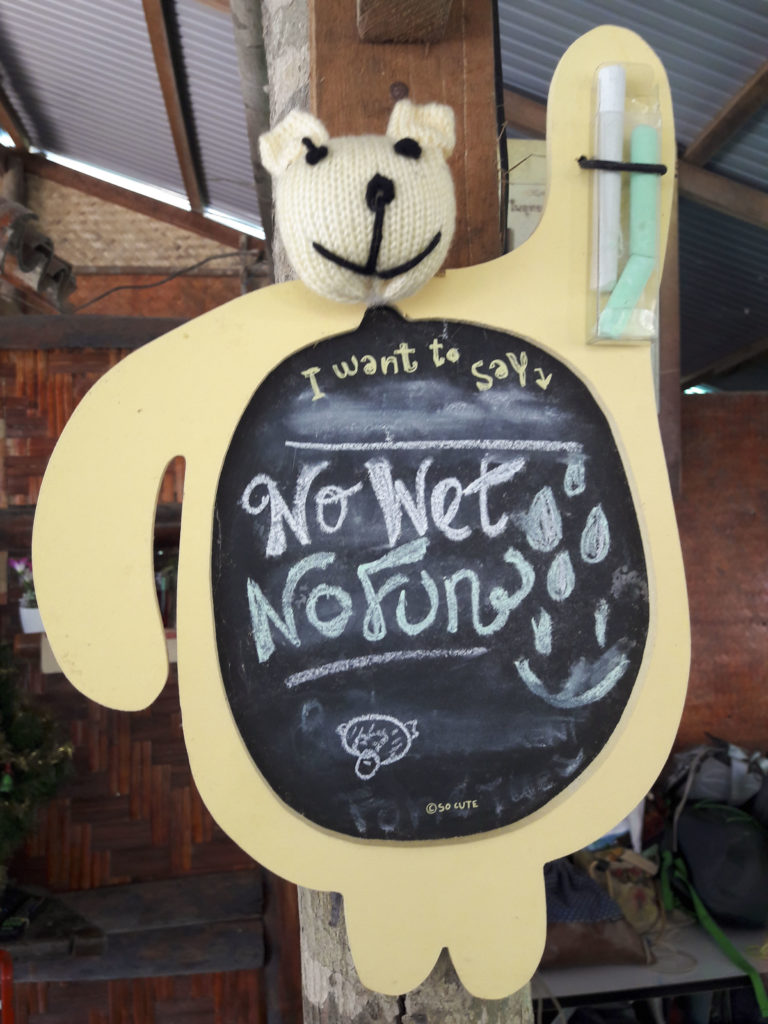 A quick Thai lunch, followed by a refreshing swim in the lake, and a dozen of photos later, we were ready to roam the jungle that is believed to be over 160 million years old, making it one of the oldest rainforests on Earth and a home to gibbons, macaques, elephants, bears, boars, tapirs, deer, marbled cats, over 300 bird species, numerous bat varieties and maybe tigers.

I tried to keep pace with the rest, but my feet we caught in what was the thickest and stickiest mud. I leaned forward trying to pull my feet out when somehow I slipped, flipped around and fell flat on my face. As I was getting up, I started to laugh remembering the grinning face of the Thai driver who foresaw this moment. Back on my feet, covered in mud from head to toe, a little embarrassed, I continued. Thanks to my shoes I was famous – in no time everyone knew who Valeriya from Bulgaria was. 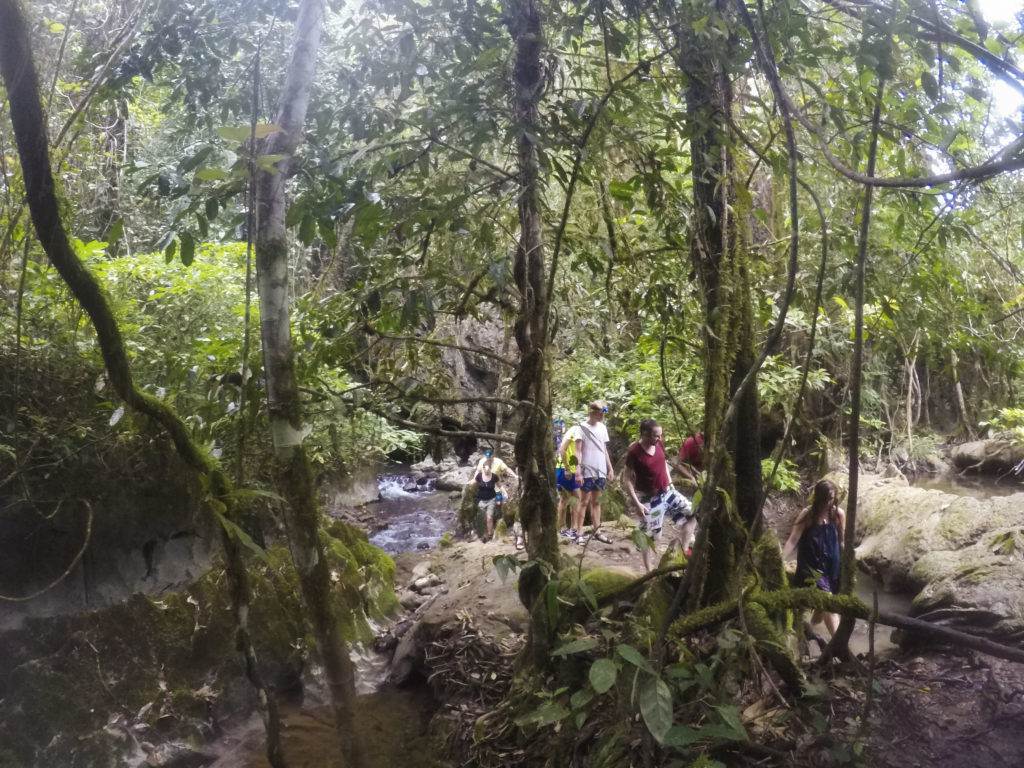 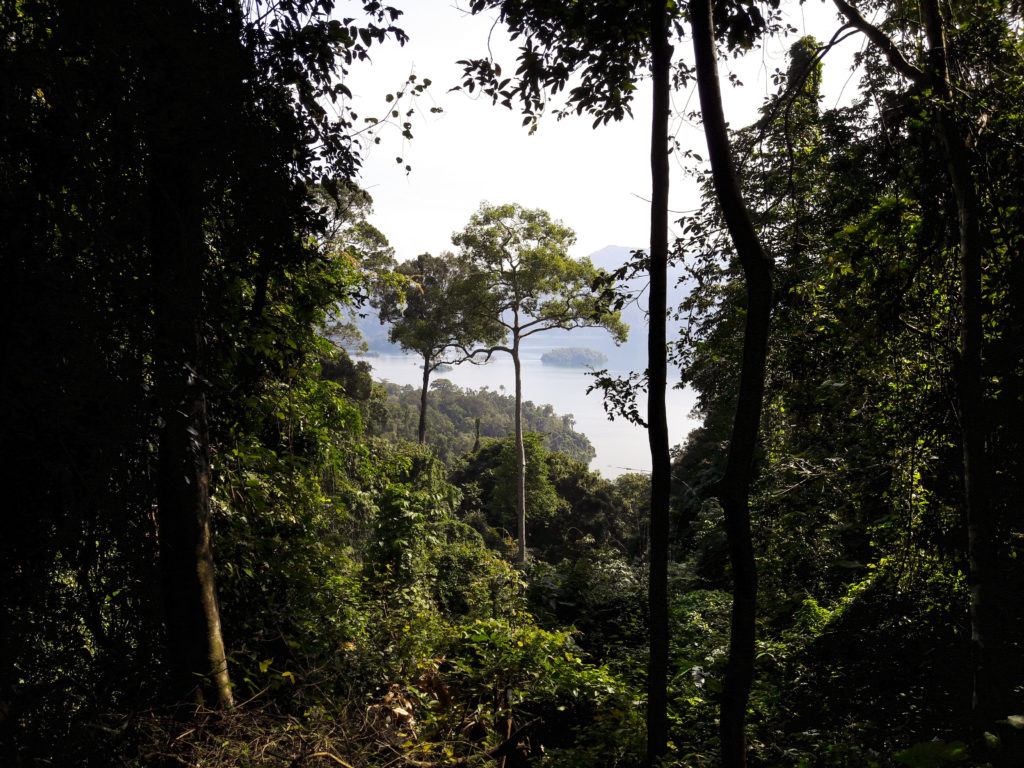 Into the wild, Khao Sok

We were trekking for about an hour through mud and rocks, swam across rivers and observed rich fauna. Unlike Khao Yai, we did not see a lot of animals, except for a few tarantulas occasionally crossing our path. Cho said that we were a big group making a lot of noise scaring the animals away.

We reached Nam Talu – a 700-meter (1700 ft) deep cave with two openings and a stream passing through it. With the hint of having to wade through neck-high water and be confronted with gigantic spiders, bats and other creatures, we took deep breaths and stepped through the dark, voluminous opening of the cave. Besides the complete darkness and occasional screams triggered by the sight of the colorful eyes of hand-sized spiders illuminated by our headlamps, the first half-hour-worth-of cave was a moderate trek with spectacular scenery. As we were getting deeper and deeper into the cave, the walls were getting narrower and narrower and the water level kept on rising. Waist-high into water, it was very hard to move forward as we no longer could see the stony, uneven ground. The last 100-meters we had to swim our way out of the cave. 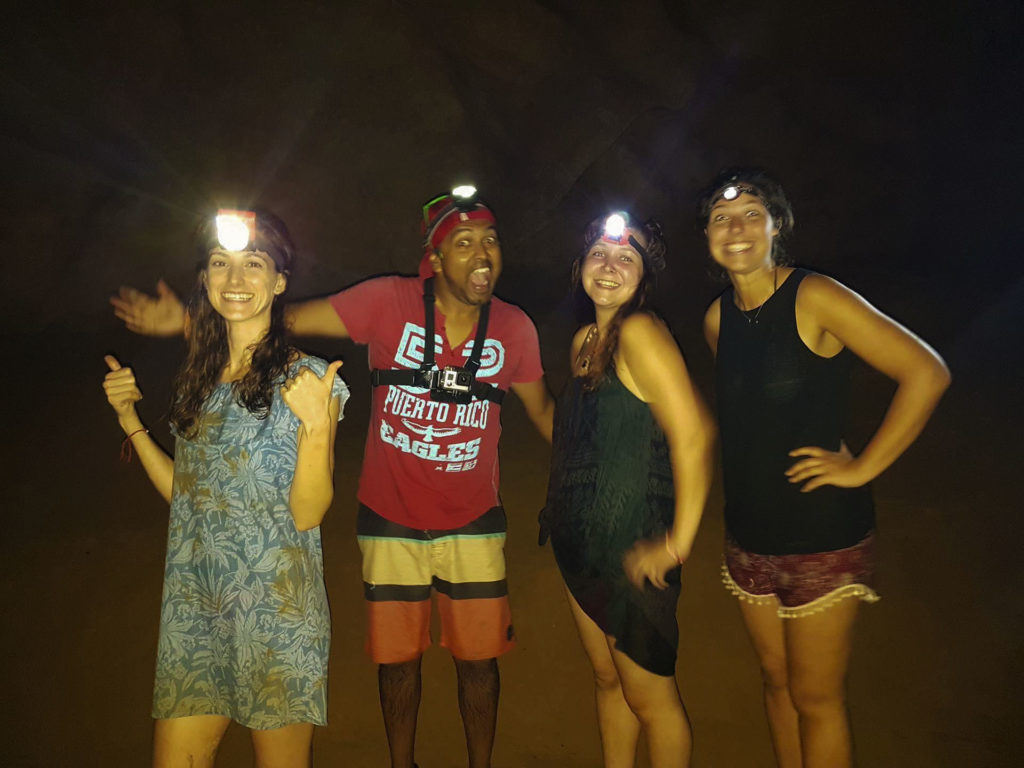 Out in daylight we stopped for a while to rest. Cho was walking around smiling full of energy while we couldn’t believe we just walked and swam through spiderville in complete darkness. He was an interesting fella, by far not a typical guide. He had one “rule”: “When you OK, I – OK. When you not OK, I – OK. I always OK. OK?” He kept on repeating it constantly during the whole day. Always with a smile on his face, he absolutely lived by his simple life credo.  As we were walking he would start screaming making monkey sounds or swing on a liana or hide behind a huge tree or a rock only to scare some of us.

He said that in the twenty years he had been a guide, he had never met a Bulgarian. I felt like I was the Bulgarian Christopher Columbus, the very first one of my fellow citizens to have set foot in this evergreen forest. I smirked in triumph. Then he continued, “Bulgaria is close to Switzerland, right? I have always wanted to go to Bulgaria.” “Right”, I said disappointed. “Close. They are on the same continent. Bulgaria is the Switzerland of the Balkans.” I laughed. He laughed as well but certainly not because he got the joke. 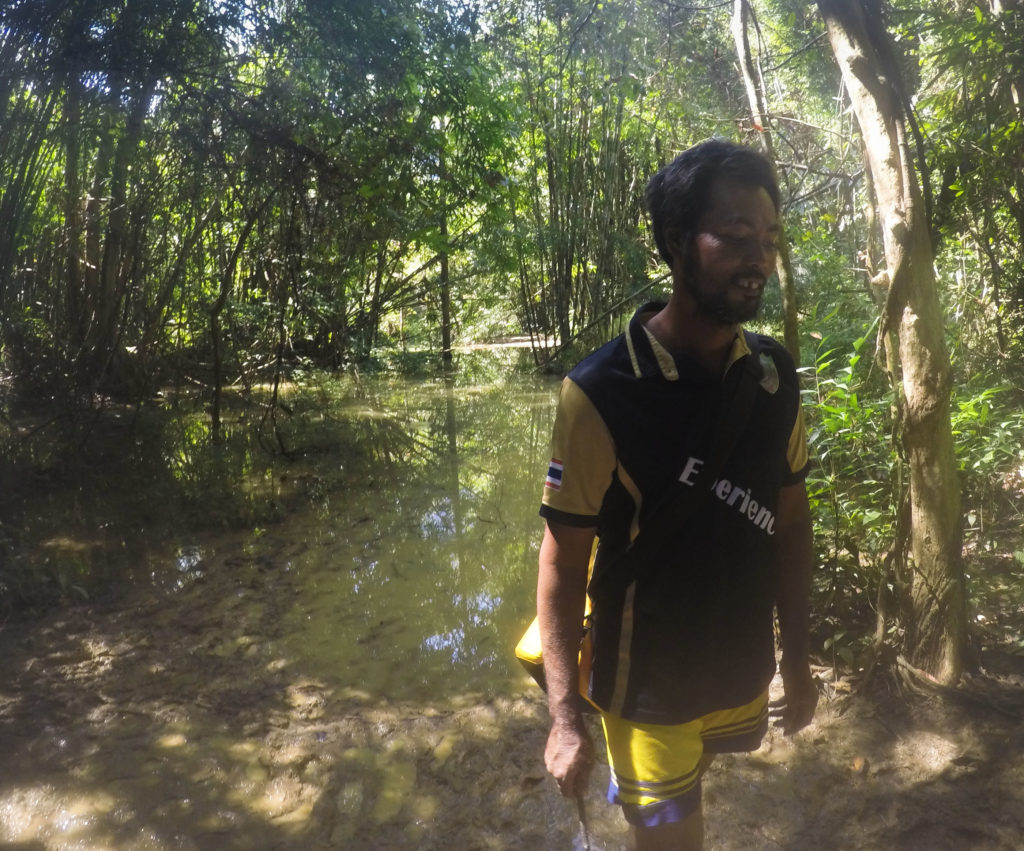 We came back to the lake houses in the late afternoon. Right before dinner it was time for a night safari. Good news was it was just a leisurely boat ride along the lake with a large searchlight. At one point Cho stopped the boat and directed the light to the crown of a huge tree where a bunch of hornbills were hiding. On the trees close to the surface of the lake we saw a group of monkeys feeding. He turned off the engine so we could enjoy the dead-calm lake and listen in awe to the sounds of the jungle.

When we came back, a meal for champions was waiting for us: local deep-fried fish, chicken massaman curry, fried noodles, green papaya salad, steamed rice, chopped pineapple and watermelon. Very impressive (and delicious!) having in mind how remote the location was. 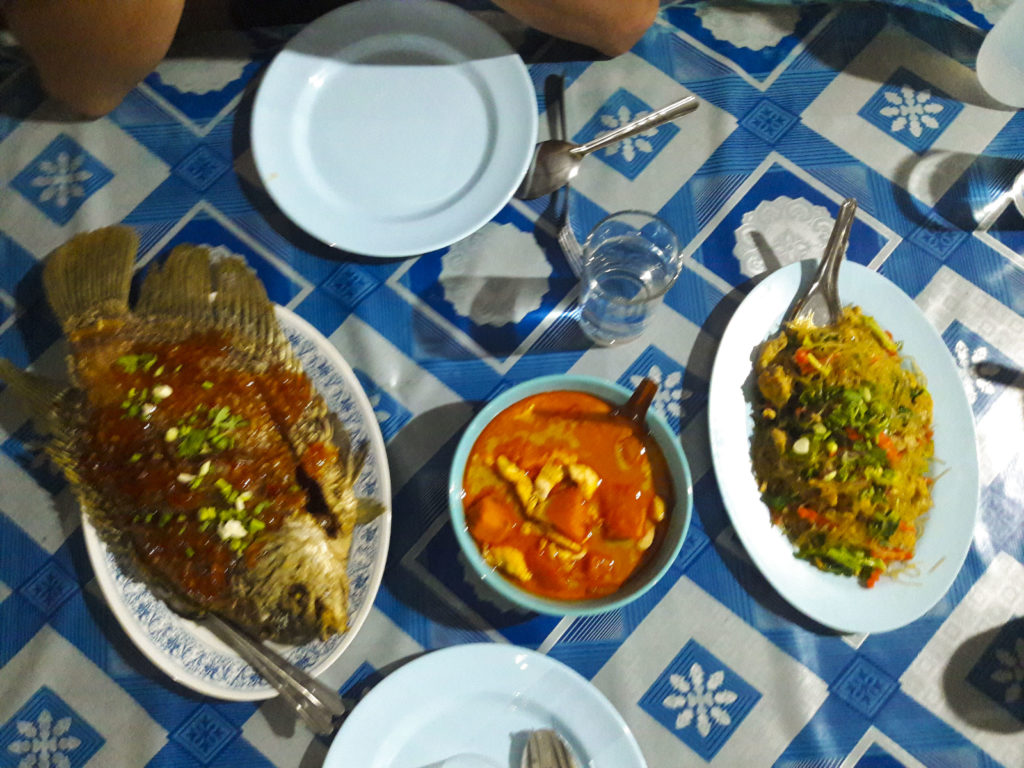 Giggles and happy chatter accompanied our munching. If in the morning we were a bunch of strangers who signed up for a jungle trip, by dusk, after a full day of Indiana Jones adventures, it felt like we had known each other for quite some time.

On my left side was Terry, an Australian, who had set on a year journey around the world (or till he ran out of money). He worked his ass off in the past year. Limiting his social life to a minimum, he saved all his money for this trip.

On my right side was Alison, a Belgian, in her late twenties, who followed her boyfriend and moved to South of France. They broke up but she continued living there for the past three years and had no intention of going back to Belgium. Her visit to Khao Sok was part of her one-month trip to Thailand away from work.

Across from me was Patrick, an Italian in his late twenties. His parents, a German and an Italian, adopted him from the Philippines when he was a baby. Working as an assistant manager at his father’s restaurant in Rome, he took a one-month break in the low season to visit Thailand. He spoke six languages.

Next to him was  Kat, a twenty-four-year-old British girl, living “week for week” as she said. She had been working on a Work&Holiday visa in New Zealand and hadn’t been in the UK for over three years. She was truly living in the present with no plan for tomorrow.

A little further away were Wein and Rob, two British fire fighters in their forties, friends, traveling together on a holiday. Wein was “collecting faces”. He had decided to take portrait pictures of the people he met during the trip.

All exuberant, we were eager to share our stories not with Facebook but with one another. None of us was busy scrolling through “rise”, “mayfair” and the rest of them filters at the bottom of our screens, looking for the perfect one to filter our reality. We were present and the reality needed #nofilter. I want to think that this had nothing to do with the lack of Internet and it was a conscious choice rather than an alternative forced by the circumstances. 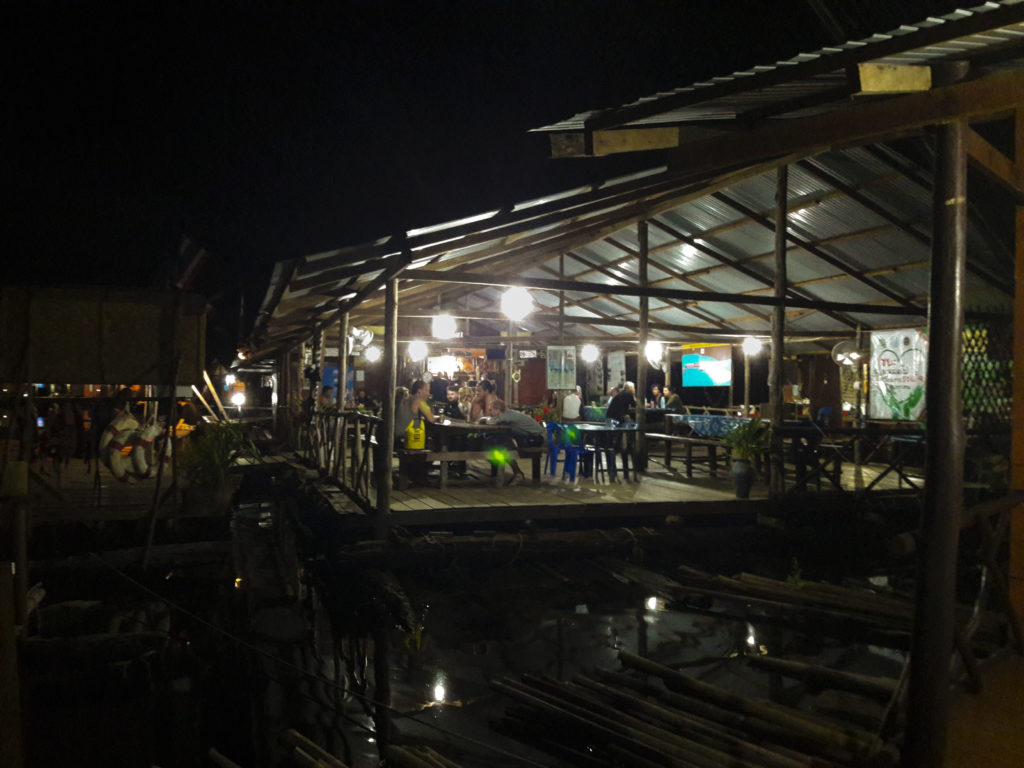 When the lights went off the only thing I could hear were the high loud pitched screams of the hornbills, the monkeys’ constant chatter, the chirping of the crickets and the snoring of the two German guys in the bungalow next to mine.